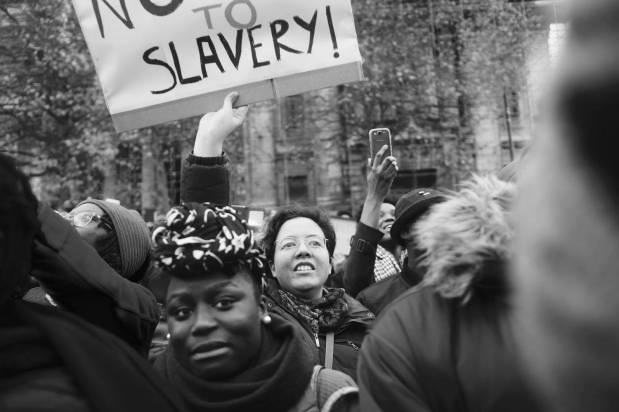 I was involved in two protests over the last two weeks, one out of pure volition, the other out of pure necessity. The protests had similar themes: the victims were oppressed and being imprisoned by authorative States. The European Union and the international community were turning a blind eye to the indignity and lack of humanity. The protesters chanted, “Freedom! Dignity! Equality!” and “Wake up Europe!”

I was particularly committed to one of the protests, on slavery in Libya. We, the world, had known about the thriving slave trade in Libya since April when the International Organisation for Migration published accounts of migrants being bought and sold, for menial work, hard labour and for sex. Sub-saharan Africans were imprisoned in private and government-run detention facilities, and as well as being auctioned, many were tortured by smugglers, militia, or whoever was in authority if they failed to pay up extra money for their journey to Europe.

It had to take another seven months, this time thanks to a CNN documentary for we, the world, to react. This time, thankfully, we woke up. We took it seriously and we say that we are doing something about it.

I had never protested in my life. Yet, I had never felt so appalled and disgusted over something as much as I did over this issue. Not even Brexit, as gut-wrenchingly revolting as it is, did not stir up as much frustration, anger and passion as watching people being sold off did. On Saturday, 25 November, I joined 2 500 people in Brussels to protest against slavery in Libya.  That’s me in the picture saying no to slavery (courtesy of Camille Van Durme).

The second protest I was involved in concerned 45 000 Catalan nationalists protesting against the forced exile of the President of the Government of Catalonia, Carles Puigdemont; the imprisoned members of his government; and against the EU’s stance on the supposed independence referendum. I unfortunately ended up in the melee as it was literally outside my flat and I had to walk through the masses streaming Catalan flags to get to work.

Like with the slavery protest, I was inflamed by the same passion. Yet this time, the anger and frustration was pointed at these nationalists. How can two protests, with the same chants, calling for almost the same thing be worlds apart from eachother? How can the voice of one set of oppressed people be equal to the other?

They can’t. I don’t pretend to understand the Catalan independence movement and the suffering of its people but I do understand this: there really are people on this earth who do not have the freedom to express themselves, who do not have a constitution that protects them, who ARE NOT FREE. The Catalan people, in the most basic sense of the word, ARE FREE. They can vote in elections, they can express their opinions, they can freely travel, they are NOT BOUGHT AND SOLD.

The freedom to protest is a precious and hard-fought freedom. I am thankful we can do so without risking our lives. But the chants and demands of one protest this week cannot equate with the other the week before. Protest without perspective is pointless.