“I could feel justice being subverted long before we started picking a jury. I could feel the trial turning into a circus.”

One of the things I’ve been meaning to do for a while on the blog is write a short hommage to the people who have really impressed me: dead or alive, real or fictional. There has been something so extraordinary about who they are, what they have done, or even the circumstances that have happened to them, that they are worthy of being a “legend” in my eyes.  One definition of ‘legend’ in the urban dictionary is this: “A legend is someone or something whose coolness extends beyond all space and time”. I’ll go with that.

This month’s living room legend is Marcia Clark, the lead prosecutor of what was considered the trial of the 20th century, the People of the State of California v O.J. Simpson. Twenty years later, the trial has been serialised into ten episodes, The People v O.J. Simpson: American Crime Story. Marcia Clark is portrayed excellently by Sarah Paulson. As an aside, there were many notable actors in this series including Courtney B. Vance, Sterling K. Brown and John Travolta (!).

Marcia Clark was relentlessly criticised during the trial. If it wasn’t her perm, then it was her dress sense (she wore sombre, straigh-cut suits), or the fact that she seemed to come across as a bitch in the court room. Her private life was laid open to bare: old pictures of her being topless on the beach re-surfaced, her custody battle with her ex-husband. She faced sexism in the court: Johnny Cochrane quipped about the fact that she could not stay late in court because of child care. I recommend you read this good New York magazine article which encapsulates the mockery, sexism, misogyny, retorts she endured not just in the press, but in court too.

Yet, she carried on. She worked hard on the case to persuade the jury that it was the overwhelming evidence that mattered, not the racism of the LAPD. In the series, after the verdict was given, Gil Carcetti, the District Attorney, tells Marcia how much he admired her. She fought with integrity, even when the defence  were pulling every trick in the book to undermine her professionally and personally.

Gil Carcetti stated that the no guilty verdict was based on emotion, not reason. Unfortunately, in the heated aftermath of the Rodney King riots, African Americans in Los Angeles were still reeling from police racism and brutality. Only from the distance of twenty years does one realise that this case wasn’t really about the murders of two people, it was about the fallout of America’s ugly and complicated history with race.

For Marcia, not only did she have this to struggle with, but also the sexism thrown at her. Seeing the blatant misogyny twenty years later is shamefully laughable. The New York magazine article highlights the time of the 80s and 90s where feminism was on pause, that calling oneself a feminist was viewed negatively. With no internet, no social media, the tabloids ruled and columnists, newscasters, and chatshow hosts could ridicule and criticise and the public would just swallow it. Unlike today, there was very little room for dissent, or for female solidarity.

Things appeared to have moved on a bit since then. Being chastised for child care, or labelled as “hysterical” or a bitch for doing your job would be unacceptable in the workplace today. Yet, it still saddens me when a female news anchor’s flowing locks garner more attention than the actual news, as happened to Anne Claire Coudray on French telly, or when female newsreaders or presenters are dropped from their shows for being too old.

Looks like gender equality has a long way to go and Marcia Clark bore the brunt of sexism. But she was committed to her job and fought the good fight. For this, Marcia Clark, you are a living room legend. 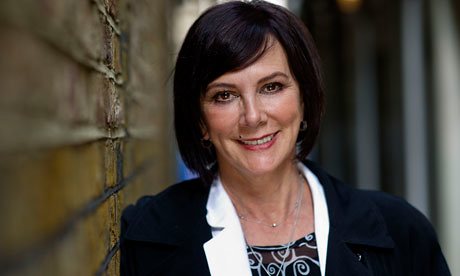 Photo from The Guardian.